Extending for four decades now, the war on drugs has ingrained a certain ideology into society. What was sold as an initiative to get dangerous drugs off the streets has conceived a totalitarian mindset that government has the authority to control everything you eat and drink and, if you disobey, the state can fine you, destroy your property, raid your home and throw you in jail. I’m not talking about cocaine or meth. I’m not even talking about marijuana. I’m talking about milk.

Here’s an excerpt from an article from Info Wars on a “raw food raid” where armed agents bust milk and cheese sellers:

(NaturalNews) The raid on Rawesome Foods by a combined force of agents from the FDA, Dept of Agriculture, CDC and the LA County Sheriff’s office wasn’t the only SWAT-style armed raid that took place today. Sharon Palmer, a mom and owner of Healthy Family Farms was also arrested and taken to jail. A third woman, Victoria Bloch, the LA County liaison for the Weston A Price Foundation (www.WestonaPrice.org) , was also reportedly arrested, NaturalNews has learned.

All three are reportedly being charged with conspiracy to commit a crime. What crime? The “crime” of advocating raw milk for consumers!

As NaturalNews previously reported (http://www.naturalnews.com/033220_R…), the SWAT-style raid was conducted like a terrorist operation, where the cops immediately went after Rawesome’s cash and then began vandalizing and destroying the store’s entire inventory.

This is exactly the kind of behavior now taken for granted in the War on Drugs, in which multiple government agencies collaborate and perform raids armed to the teeth and then proceed to destroy the illegal goods. Except that these aren’t armed and dangerous drug cartels; these are farmers. In fact, these farmers produce a product, dairy, that is consumed, legally and without government harassment, by virtually the entire United States population every day. The only difference is that this milk wasn’t heated to 161 degrees for 15 seconds and, therefore, has been deemed by many states to be too dangerous for there to be any legitimate use for it at all and therefore it has been categorically prohibited and is now treated much the same way as hard drugs like cocaine and meth.

Everyone should find such circumstances appalling, but not because we treat raw milk much the same way we treat drugs. After all, it really is more risky to drink raw milk than processed milk. What’s appalling is the fact that we subject people to raids, fines and incarceration based on what they put in their bodies, all “for their own good.” As if subjecting people who get caught with marijuana to prison rape “helps” them. 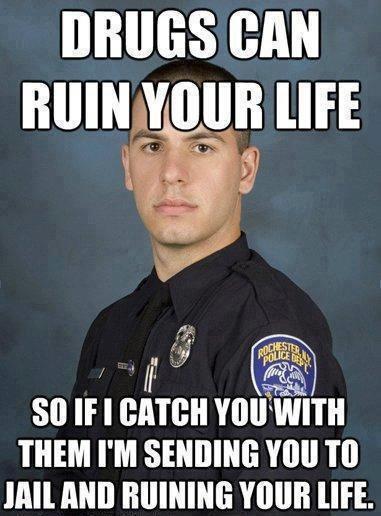 Drug abuse and addiction are serious problems. Some people also think that raw milk is a serious problem. However, in neither case is coercion the answer. Not only is such use of force wrong but it is counter-productive. When you push people they tend to push back and if we want to live in a more virtuous society unfortunately that means allowing people to make irresponsible decisions sometimes.

Subjecting people to raids, destruction of their property and harsh penalties and prison sentences, however, will never aid in the formation of a better society – especially if its over something as benign as raw milk.